A downloadable game for Windows, macOS, and Linux

On a summer night, Ophelia awakens from a terrible vision: in four days, everyone in Elsinore Castle will be dead. Even worse, she's been thrown into a time loop from which she cannot escape. Forced to relive the same four days over and over again, Ophelia determines to do everything in her power to change the future.

Elsinore is a time-looping adventure game set in the world of Shakespeare's Hamlet. Elsinore combines strong social simulation elements, a dynamic story that reacts immediately to player decisions, and a world full of diverse characters with secrets to uncover. Can Ophelia prevent the tragedy that lies before her?

Elsinore is a point-and-click adventure game set in a living world where the story plays out around you in real time. Every four days time resets, and you gain another chance to change the fate of Elsinore Castle's inhabitants.

Dynamic Story Engine: Elsinore uses a story simulation engine to determine which events occur based upon your interactions. Lie, forgive, gossip, befriend, or destroy — the actions you can take at any stage are numerous, and the game immediately responds.

Intelligent Character Behavior: Each character manages their own lives, schedules, needs, desires, and plans over the course of each time loop. Even the smallest interaction has an impact on the world around you as it unfolds.

Learn from Previous Loops: Whenever a time loop resets, Ophelia remembers anything she has learned from the previous world, allowing you to access new ways to play.

Use Your Influence: Understanding each character's motivations isn't just part of the story. It's necessary for Ophelia's survival. Characters are complex and have long histories with each other; all of them are keeping secrets.

Life-or-Death Decisions: In a Shakespearean world, most roads end in tragedy, and characters are quick to meet a grisly fate. Hard decisions and terrible trials force players to think on their feet.

We suggest the following minimum requirements (recommended in parentheses):

In order to download this game you must purchase it at or above the minimum price of $9.99 USD. You will get access to the following files:

[spoilers] Illustrated endings cut from latest version?
by IBwWG · 3 posts
123d
Does this version have the 1.4 patch?
by 7Roo · 2 posts
1y
Is it true there is a binary person, a lesbian and several characters are gender...
by tarjan95 · 1 post
2y
"Skip scene" button (and keyboard shortcut)
by IBwWG · 1 post
2y
"Show Buttons"—Shift doesn't seem to do anything
by IBwWG · 5 posts
2y
Romance
by Babydoll · 4 posts
2y
[spoilers, although early] Documents? What documents?
by IBwWG · 2 posts
2y
Guildenstern romance?
by Sophie Ayase · 2 posts
2y
Post a new topicView all posts 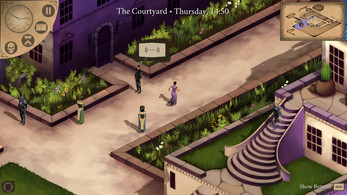 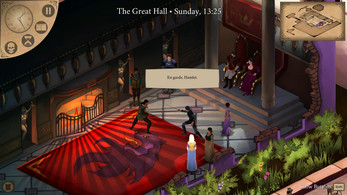 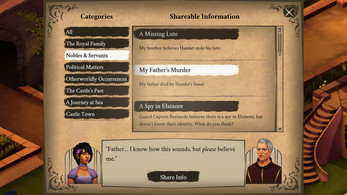 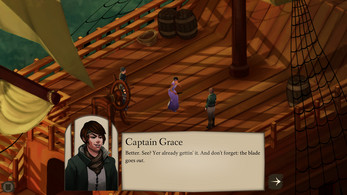